Books » Fiction for Young Readers » Where the Shouting Began 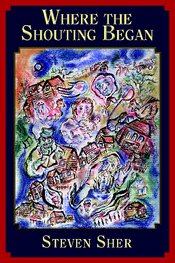 Where the Shouting Began by Steven Sher

A real village called Slawotich existed long ago. Now Steven Sher brings this shtetl back to life in five eloquent stories in which the mystical infuses every day. In the guise of a giant, Greed comes to Slawotich and menaces the villagers. A seller of mystical books inadvertently leaves plagues and destruction in his wake as he departs each town he visits. A young girl struggles to balance traditional observance with her compassion for a chicken. A peddler, weary of his wanderings, experiences a series of transformations, revealing the burdens that other creatures must carry. And in the title story, the village rabbi—modeled after the author’s great grandfather—finds a divinely-inspired way to protect the villagers from a pogrom. Where the Shouting Began honors the past and speaks to the present with wisdom, insight, and humor.

You can always tell if someone comes from the village of Slawotich, where my grandmother was born. It's as easy as recognizing the bark of a dog, the squawk of a crow, the snort of a horse or the hiss of a cat.

No matter where you find Slawotichers, one thing sets them apart from other people. They all speak loudly, from the oldest yenta down to the babbling youngest child. There's no such thing for them as a normal voice. If someone shouts to be heard though he's standing next to you, then his family probably came from this small village.

When this shouting started no one is sure.

Some say that God was deaf to Slawotichers' prayers and so they gradually began to raise their voices.

Some claim the Jews of Slawotich were a lost tribe shouting to be heard.

Some say these voices came about because the Slawotichers loved to shout at friends and neighbors, always finding time to kibitz and debate.

Some insist the tsar of Russia tried to silence all the Jews of Slawotich and so, being a stubborn bunch, they grew loud to spite him.

Maybe yes, maybe no. There's probably truth in all of this. What I can tell you is the story my grandmother told, many years after she left her childhood village for America. And yes, she told the story in a voice so loud that still it rings in my ears these many years after the telling.

It was a time when her father was the rabbi of Slawotich and the people lived their days in peace, their nights without fear, as slow to change as the four seasons. For many generations, the people of her village had lived quiet but fulfilling lives. Most were happy, though almost all were poor. No one got too angry. No one raised a voice except in the rarest case.

But things got bad all over Russia. Food was scarce, and winter came and stayed a long, long time. Police beat those who dared complain and those who didn't. Many Russians were unhappy with the tsar and the tsar in turn didn't trust anyone, so he made their lives even more miserable. Then the peasants took it out on the Jews, who bothered no one.

News of pogroms began as a whisper but quickly grew and swept through the village like a cold blast of air, hovering over their lives, threatening to blow Slawotich away. Soon the rabbi's frightened followers were at his door, crowding in his study.

The rabbi shushed them with a wave of his hand and closed his eyes. In the candlelight, his wild eyebrows gave off sparks, his beard flamed like a burning bush that didn't burn. He set his forehead in his hand, supporting all his thoughts on a single elbow. Standing back a respectful distance from where he sat, they waited for his answer.

Praise for Where the Shouting Began

Wise without being bitter, simple without being naïve—these are tales you’ll read to your children with a little shiver, the way the great family stories are read.

Joanne Greenberg — author of I Never Promised You a Rose Garden, Of Such Small Differences, The Far Side of Victory, and many other books

Take a pinch of Chelm, a dab of midrash, hearty sprinklings of Kafka and I. B. Singer, a touch of Rabbi Nachman and you'll have a taste of Steven Sher's stories from Slawotich, a town where magic is as common as black bread.

Eric Kimmel — author of Hershel and the Hanukkah Goblins, Gershon’s Monster, and Wonders and Miracles: A Passover Companion

Where the Shouting Began has been added to your shopping cart.