Books » Fiction for Young Readers » Survival of the Fittest 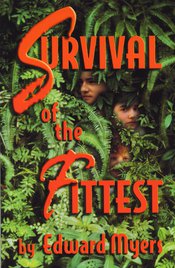 Survival of the Fittest by Edward Myers

Three children en route to visiting their father at a medical mission narrowly escape death when their small plane crashes deep in the Peruvian rainforest. The plane's pilot dies in the crash, leaving Rus, Jodie, and Matt struggling to survive on their own in a lush but hostile environment. How can a 13-year-old and two pre-teens fend for themselves without equipment, food, or skills? How can these kids overcome their rivalries and simmering resentments to work together and save their lives before time runs out? With a harrowing story, alternating points-of-view, and strong male and female protagonists, Survival of the Fittest is an adventure tale guaranteed to thrill boys and girls alike.

he wrote in the mois­ture condensing on the front window of the airport waiting lounge.  But how?  Trust people, Rus Cooper told him­self, and they always let you down.

Jack's plane was already hours late.  Now and then Rus looked up, staring through the glass at what lay beyond.  The airport tarmac.  Luggage carts piled with suitcases and boxes.  Some parked airplanes:  two old prop planes and a small new jet.  The runway.  A fence.  And, just past the fence, great thickets of vegeta­tion—palms, bushes, big leafy trees, tangled vines— interrupted here and there by thatched cottages.  The rainforest.

He rubbed out the initial T.

You really can't afford to rely on anyone.  Not for anything.  And where does that leave you?

He rubbed out the final T.

Here's where it leaves you, he thought:  sitting in the airport near Iquitos, Peru, waiting and waiting for Jack Cooper, who is Matt's and Jodie's father and who, having once been Rus's uncle, is now his father, too.

The airport was unlike any Rus had ever seen.  Back in the States, you couldn't wait anywhere but in the waiting lounge.  Here you could go almost anywhere without anyone giving a hoot.  Growing restless, he opened the door and stepped outside, onto the tarmac.  Then his cousins—his brother and sister, Rus reminded himself with a laugh—left the lounge, too, and followed him to the baggage area.  They were now just a few dozen yards from the nearest aircraft.  Rus could have walked right over to the parked planes, could have touched them, could have climbed aboard to explore them.  Instead, he simply sat on his day pack and waited for Jack to arrive.

So far this trip had been everything he'd dreaded.  Hours and hours on the plane from Newark to Miami.  The luggage mix-up at the Miami airport.  The long wait there.  Then another flight, this time from Miami to Iquitos.  Now the delay in Jack's arrival.  Worst of all, the constant, inescapable presence of Matt and Jodie.  The combined hassles were almost more than Rus could tolerate.  There ought to be a law, he told himself, that someone his age, thirteen, shouldn't have to endure the company of younger kids longer than a few hours.  Or maybe ten minutes.

"Dad's plane," Jodie announced.  She stood a short distance to his left.  Though dressed in shorts, a T-shirt, and sneakers, she looked so prim and proper that she might as well have been wearing one of those flowery dresses she wore on special occasions.  What a princess, Rus thought.  Probably afraid she'll muss her clothing if she sits on a suitcase.  Gazing out at the runway, Jodie watched a small plane landing.  Her dark brown ponytail swayed as she tracked the aircraft's progress from right to left.

"It's him."  She smiled, flashing her braces.

How could an eleven-year-old, he wondered, be so gullible?

Rus turned to see his other cousin about a dozen feet to the left.  Matt was eight, dark-haired like his sister, and endlessly energetic.  Worse yet, he was very smart, well aware of being smart, and eager to remind Rus and everyone else about his smartness.  Matt had spent the last few hours building a complicated spaceship out of Legos; now he zoomed around, making rocket noises.  He wasn't doing any harm, but all the racing back and forth had driven Rus half-crazy.

Rus decided to ignore him.  Matt considered himself the world's greatest eight-year-old inventor.  Right now he claimed to be testing the first fusion-powered transport.  He was so caught up in his fantasy that he'd almost gotten hit by a motorized baggage cart.  Would he survive long enough to see his dad's plane arrive?  Maybe, maybe not.  Rus didn't really care.

A goofy-looking plane taxied toward the airport terminal.  Much smaller than a jet airliner but bigger than a private plane, it had high wings, two propeller engines, and five or six windows on each side.  Words on the fuselage read UNITED MEDICAL MISSIONS.  So Jodie was right after all.  Luckily, she spared Rus one of her I-told-you-so glances; she only cupped her hands against her ears while Matt hollered incomprehensibly over the aircraft noise.  Pathetic!  Yet Rus felt no excite­ment at the thought of Jack's arrival—just a dull sense of relief.  At least someone else could deal with these two brats for a while.

Only one person emerged from the plane, and it wasn't Jack.  Short and wide, with black hair and a black mustache, he wore a rumpled pilot's uniform and a slightly flattened pilot's cap that looked as if he'd sat on it.  He crossed the tarmac toward the baggage area.  "You are Jack's children?" he asked in accented English.

The man gestured with a folded piece of paper.  "Your father, he could not leave the clinic.  An emergency."

"He sends you this message."

Big problems here—I'm struggling to help the docs with a rush of surgeries.  You'll be fine with Capt. Lozano, who's the pilot for the clinic.  He'll bring you to Nuevo Belén.  See you this evening!

Captain Lozano smiled and gestured toward the plane.  "We should go."

Jodie looked uneasy.  "Are you sure this is what Dad wants?" she asked.

"He waits for you," said the captain.

Rus shrugged.  "That's his handwriting.  It's the clinic's plane.  Let's just get it over with."

Matt started jumping up and down.  "It's a Badger!" he shouted gleefully.  "A turboprop!"

Rus stared at the plane and then reluctantly followed the pilot as he led Jodie and Matt across the tarmac.  He wasn't eager to be cooped up with his cousins yet again, but even another flight in their company seemed better than staying in Iquitos.  As for what was still ahead:  he wouldn't count on anything—or anyone.  He'd wait and see.  He'd follow his hunches.  He'd look after himself.

Waiting to take his turn to climb the little folding staircase into the plane, Rus used a finger to write in the condensation on the fuselage:

Praise for Survival of the Fittest

The cliff-hanging excitement in Survival of the Fittest comes out of natural situations, not artificial manipulation, which makes for genuine thrills. . .. The teen and pre-teen characters are utterly real.

Joanne Greenberg — author of I Never Promised You a Rose Garden, In This Sign, and Of Such Small Differences

More than a tale of three children who survive a plane crash in the Peruvian rain forest, this YA adventure story has lots to say about family links, emotional abandonment, and the need to love and be loved.

Mickey Pearlman — author of What to Read: The Essential Guide for Reading Group Members and Other Book Lovers

Survival of the Fittest has been added to your shopping cart.