Books » Fiction for Adults » A Season of Delight 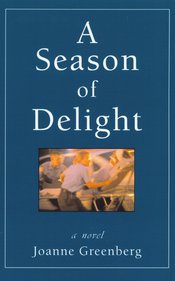 A Season of Delight by Joanne Greenberg

Empty-nester Grace Dowben finds solace in her marriage, in her participation in a small-town community, and in her work volunteering on a fire-and-rescue squad. But when a twenty-something newcomer named Ben joins the squad, Grace finds her life turned upside-down. Soon she must decide how to resolve her love for a man young enough to be her son. Grace's decision lies at the heart of this warm, wonderfully believable novel.

Praise for A Season of Delight

. . . a vibrant evocation of an ordinary life touched by pain and joy, love and sharing, commitment and hope.

Greenberg tells the story of an ordinary mother's anguish with dignity and compassion.

A Season of Delight has been added to your shopping cart.