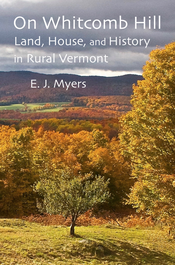 On Whitcomb Hill by Edward Myers

What does it mean to love a place? Is it simply a matter of delighting in the beauty of a specific parcel of land—for author E. J. Myers, land in rural Vermont? Or does loving a require a deeper commitment, a deeper exploration, that goes beyond aesthetics? Living now in an 1840’s-vintage farmhouse on ten acres of meadow and woods, Myers believes that he has inadvertently grasped the “thread” of this specific place and, by pulling it, has found his property connected to everywhere else. In his new book On Whitcomb Hill, he explores how the historical, ethical, and spiritual aspects of owning his property inspire a sense of stewardship not only of his ten acres but of the wider world.

On Whitcomb Hill is a tightly woven collection of twenty chapters that explore interconnectedness in the age of environmental crisis. Topics include (among others) the landscape, ponds and streams, traditional tools, meadows, local mammals, moths, cold weather and heat sources, and the complexities, contradictions, and ironies of Vermont history and culture. Written in the spirit of Thoreau’s Walden and in the style of contemporary environmentalists such as Edward Hoagland, Gretel Ehrlich, Annie Dillard, and Wendell Berry, On Whitcomb Hill explores a small corner of the American landscape and the aspects of place that it raises. This book is both a celebration of Vermont’s iconic beauty and a broader inquiry into what love of place can tell us. Ultimately it asks a crucial question: To what degree does love of place provide a door to other realms of understanding?

An ordinary house, an ordinary hill. Built in 1840, the house seems old to us, but old houses in northern New England are as common as cows, so this one is nothing special, and the hill is just a minor rise on Vermont’s rolling surface. The ten acres of meadow and woods are altogether typical for this central part of the state.

My wife and I don’t care. The property on Whitcomb Hill drew us, charmed us, and struck us as remarkable for a long time before we ever stumbled into ownership of the house and its little plot of land. For a month each summer over a span of six years, Edith and I had rented a cottage just a mile down the road. That rental was a random bit of luck, a choice resulting from the Internet equivalent of throwing darts at a map on the wall. Casting about for a summer rental in Vermont, we had quickly ruled out tourist towns like Stowe, Waitsfield, and Killington; instead, we had chosen a less-chic but still beautiful part of Orange County southeast of Barre. This area is one in which most people either work the land, support themselves through the trades, or commute to work in nearby cities. The towns look more or less as they must have in the 1950’s. The landscape is dotted with dairy farms. Edith and I, along with our then-teenaged son, Cory, spent two or three weeks each summer from 2004 until 2010 in this quiet and unpretentious place.

One of our activities during those years was walking the local roads. Hilly and heavily forested, Orange County remains largely undeveloped. We would walk almost daily through the calm, sparsely populated farmlands. On our favorite route, we would always pass a yellow house near the crest of a hill. That’s the prettiest place in the area, Edith and I would comment time and again to each other. Though clearly old, it was attractive and well maintained. The surrounding plot of land, the woods beyond the land, the farms beyond the woods, and the far ridge to the east gave an expansive mood to the entire property. Time after time we walked past this property, commented on its beauty, and continued down the road.

In June of 2010, Edith and I drove from New Jersey across the United States to drop off Cory at Deep Springs College, in the California desert, for the start of his first semester as an undergraduate. We flew back to the Northeast to conclude that cross-country errand. Then, in keeping with our routine summer schedule at the time, Edith and I drove up to Vermont for a few weeks at the rented cottage.

We had heard accounts over the years describing how difficult many couples find the empty-nest stage of life. When the last son or daughter leaves for college, people told us, everything changes. Hands-on parenting ends; domestic routines no longer focus on children’s needs and routines; the house grows quiet. A relief, surely . . . but also a potential shock to the system. We had already observed the consequences among many friends, neighbors, and acquaintances. Sometimes the effects have been creative: marriages strengthened, career vistas broadened, physical and intellectual energies renewed. Sometimes the outcomes have been much less positive, especially in terms of marital side effects: several couples we know split up within a year or two of their kids’ departures. Edith and I never felt concerned that we would experience an unpleasant outcome. We remain close, and we’ve felt confident that the empty nest would become a locus of much more positive than negative change. Yes, we would be wistful about Cory's absence, just as we feel the absence of our daughter, Robin, who had left home for college five years earlier. We also expected to feel some sadness about the end of hands-on parenting; we would miss the opportunities to witness the constant and often astonishing mutability of children’s development; and we would also miss the richness, complexity, humor, and “thusness” of day-to-day family life. But there would be benefits as well: more time for each other, less manic activity, less pressure, more rest, more opportunities to pursue our own interests. Among other things, we would be able to devote renewed energy to artistic pursuits. So, when friends asked us, “How do you feel about the empty nest?” our answer was: “Just fine.”

What we never expected was a change of venue. We intended to stay in Maplewood, New Jersey, less than twenty miles west of New York City, where we had lived for almost twenty-five years and had thrived in a vibrant multicultural town; we would spend a month or so each summer at the rental house in Vermont; we would travel elsewhere when opportunities arose; but we would basically remain in the same setting that had served us well for so long.

Then, just a couple of weeks into that year’s stay in Vermont, which had started shortly after we returned to the Northeast from California, our landlady informed us that she couldn't rent the house to us the following year. Her thirty-something daughter and the daughter's husband would soon be moving there to live while building their own home on a nearby plot of land. End of story. So, unfortunately, our sixth stay in that old farmhouse would be the last.

This news prompted Edith and me to walk up the road right after the phone conversation with our landlady. More specifically, the news resulted in our passing the yellow house just a day after its owners had posted a little hand-written sign near the front garden: FOR SALE.

One thing led to another. Edith and I stopped by, we met the owners, and they showed us around. What we had assumed was a pretty house on a few acres of land turned out to be a larger property—the house, two large outbuildings, ten acres, and a pond. Initial conversations were cordial, respectful, and mutually enthusiastic. Doris and Paul, a retired couple in their early eighties, seemed to like us from the start. We liked them, too. Doris, petite and handsome, told us, “We want to sell to someone who really loves the house.” Her tall, craggy husband, Paul, added: “We’ve owned this place for thirty years, and we’ve really put our hearts and souls into it.”

Edith and I felt strongly drawn to the property. The old house was attractive and the right size for us, and the plot of land surrounding it was larger and more varied than we’d first assumed, fully half of it being woods. If we ever intended to make this kind of move, now seemed the perfect opportunity. On the other hand, purchasing a rural property felt daunting. Were we prepared to leave the urban environments where we had thrived personally and professionally throughout our lives? Were we capable of adjusting to country life? How could we do it? Yet how could we not do it? We debated the pros and cons for weeks; we considered all kinds of scenarios; and we made our decision. We wanted to buy the house on Whitcomb Hill. We made a bid on the property.

What followed was a best-case scenario for purchasing a house without benefit of real estate brokers. All the warnings we had heard about purchasing a FSBO property (For Sale By Owner) were pointless admonitions. Every aspect of the process turned out to be congenial, collegial, and often mutually attentive. Even our interactions with a local bank to obtain a mortgage became a pleasant experience. The only hitch occurred when the bank’s appraiser, a local resident who apparently harbors a deep resentment of “flatlanders”—non- Vermonters—low-balled his estimate so absurdly that the valuation nearly scuttled the deal. Edith and I then negotiated with Paul and Doris in person, we asked them to lower their asking price a little, we raised the amount of our down payment to keep the bank’s “loan-to-value” ratio in line, and by this gambit we succeeded in outfoxing the appraiser. The result: Edith and I secured our mortgage after all. Paul and Doris netted over 95% of their asking price. Both couples amiably signed all the documents at the closing a few weeks later.

What could be more trite than a writer moving to Vermont? Worse yet, moving into an old farmhouse? I get it. I’m aware that the north woods host almost as many writers as white-tailed deer. What, then, should I do? Should I stay clear of this state simply because so many other novelists, poets, visual artists, and musicians have found Vermont inspiring? Should I recoil from the risible aspects of a city boy finding this state’s landscape remarkable, its history intriguing, its mix of solitude and social engagement congenial? I don’t think so. Or, more to the point: no. I need this place. I want it. I feel no need to ignore it. All the better that Edith, too—herself a writer and musician—finds the place at once reassuring, uplifting, and delightful.

In mid-October of 2010, we took possession of the house and its acreage on Whitcomb Hill.

On Whitcomb Hill has been added to your shopping cart.