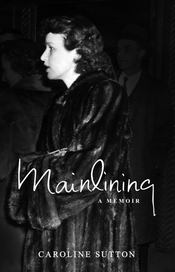 Caroline Sutton’s 2017 Don’t Mind Me, I Just Died deftly portrayed family relationships. Now in Mainlining she delves deeper, exploring her WASP heritage, memory, loss, and the ways we pass on values and traditions to our children. This incisive memoir is simultaneously a portrait of an American family and of an iconic realm with an outsized place in American culture.

Caroline Eloise Chadwick-Collins, the author’s mother, arrived in the United States when she was three, lived here for 93 years, but never felt truly at home. Although she led a comfortable life on Philadelphia’s Main Line, her restless spirit manifested itself in troubling ways to her husband, a lawyer at a white-glove firm, and to her two children. Seeking to unravel the enigma of her mother, Caroline Sutton takes us on a journey spanning decades. She traces her mother’s roots to England, where the family lived in Downton-esque elegance before losing their money and emigrating to Bryn Mawr, where her charismatic grandmother supported the family by working at the college. Sutton describes her mother’s hasty marriage to her father, a WWII Navy officer who survived the sinking of the USS Wasp, and she explores the doubts that Caroline Eloise hid from her for many years.

In this richly detailed, candid memoir, we see Sutton’s upbringing on the Main Line during the 1960s and ‘70s and her immersion in WASP conventions and formalities. We witness her attempts to escape a culture of private schools and dancing classes and to challenge her mother’s insistence on upholding appearances at all costs. Sutton finds herself caught between a controlling mother and a reserved father in a household where sentiments of love and resentment and more went unsaid. As she grows up, marries, and has children of her own, she struggles to understand how she could be both her mother’s closest confidante and an object of distrust. Ultimately, Sutton re-evaluates her roots, realizing that whether through opposition or acceptance, they indelibly shape us in spite of ourselves.

“I’m eighty-five and it’s time to speak my mind,” announced my mother. I thought she always had, to one person or another or, more accurately, about one person or another. Maybe she meant she no longer cared what people thought of those opinions, which must have been liberating in a wealthy suburb where word got around. She could parry and thrust with the best, double-edged being her method of choice.

Despite her claims of candor, I never truly knew what she thought of me. “You’re a good daughter,” she wrote once in a birthday card.

She might have signed it love, or lots of love, but the words (if they ever climbed piton by piton from her heart) never made it past her lips. Sometimes her remarks stunned me to silence; others whipped by only to boomerang at 4 a.m., triggering an echolalia of doubt and guilt.

When I took my mother to London as recompense after my father’s death and the most vicious fight of our lives, she said it had been the best five days of her life. They were not mine, and her remark made me sad. She had ridden camels with my father in Egypt, eaten at the Ritz in Paris, toured the coast of Portugal, visited St. Petersburg, Budapest, Vienna.

We shared a room in a no-frills B&B in Belgravia, one of London’s handsomest squares, so even though the place was modest, the location could not fail to meet her approval. She slept on a double bed, snoring intermittently at night, which felt too intimate, while I fretted on a lumpy cot tucked in an alcove. To my relief, she thought it was just fine, and our days passed smoothly. She had me all to herself, and Iconceded to her itineraries with ease. We walked along the Thames and past the Houses of Parliament, explored cozy boutiques, and devoured scones and tea. One afternoon, looking distantly at a row of handsome Georgian houses—to imply that I couldn’t quite understand what was on her mind—she sighed, “I feel at home. It’s perhaps irrational, but I do.” I had not been born here, she had. What she omitted about the other home was the real message, and I had nothing to say. Up we got and walked to the Tate where we waxed nostalgic over Beatrix Potter watercolors of Benjamin Bunny and Hunca Munca, a childhood commonality, and took a big black taxi to dinner. She was afraid of heights and dreaded the underground, clutching the railing as the escalator plunged downward.

At dinner, wine laden, she suddenly said, “Back when you were in highschool I often worried about you.” I looked at her quizzically. Her jaw was set, her eyes on me; this would not be a spontaneous remark. “Did you think your father didn’t love you?” Where had this come from? I never thought she concerned herself with my relationship to him. “No, I didn’t worry about that,” I replied evenly, staring at my fingers on the base of a glass of Bordeaux. My father wasn’t around much, and he’d never said he did, but I never doubted him. Fathers often operated with impunity in the universe I used to know. But I could see his pride in my every success. Sometimes that seemed like love.

He used to get on her nerves, and over the years she made seemingly harmless remarks to me about his emphatic cough or bacon grease splattered on the stove or thinning hair until some of those things got on my nerves as well. Sometimes I exited my room to find him hovering there eavesdropping on my phone conversations, which seemed creepy and incongruent with his morality and legal profession. When I told my mother, she seethed. Maligning him, after all, put her in a better light. With me she practiced one-on-one interrogation to find out what was really going on—were you drinking? did Susie lie to her mother?—and although I’m a terrible liar as a result, sometimes she didn’t quite get the whole story, leaving the implied untruths to haunt me like the overtones of a handily struck gong.

No, it was her love I doubted. It was she I came to dislike and respect and love, and here I am—with two children grown and married—still trying to figure it out, figure her out. Who was Caroline Eloise Chadwick-Collins Sutton with her entourage of appellations: Mummy, Mom, Mrs. Sutton, Chaddy, Eloise, El? Who was this immigrant who didn’t start life here in a tenement yet suffered from something missing, something amorphous, festering, and well concealed? When she died and I thought about her not only as my mother but as a daughter herself, a wife, a woman, I felt a paradoxical sense of peeling the brittle skin of an onion and witnessing the unfolding of a marigold. She had slept on a foldout couch with me when I was three and feverish with the mumps; she had protected me and my brother from any issues she had with my father, painfully upholding an illusion of stability; we two had driven across the eerie moonscape of central Iran in 1974, gazed at the mosques of Isfahan and sampled caviar in Teheran. I recalled her barrel laughter, her love of the Marx Brothers and James Bond, her decision to have strong views because who likes a milquetoast, her true opinion of the Main Line northwest of Philadelphia where she chose to live, her care for my grandfather and her closest friends who grew fearful, weak, and died before she did, her gusto, her determination to carry on. But well before she died I wrestled with the conundrum of how I could have been both her closest confidant and an object of distrust.

Mainlining (paper) has been added to your shopping cart.