Books » Fiction for Adults » An Intimate History of Exile 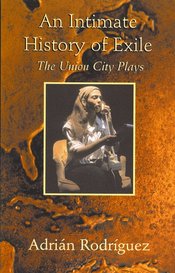 An Intimate History of Exile by Adrián Rodríguez

In his trilogy about a Cuban-American family, playwright Adrián Rodríguez casts an unsparing light on the contemporary immigrant experience. The first play, Cuban Operator, Please, presents the Fernández family through the eyes of twenty-something Abel, who has grown up in New Jersey under the shadow of his parents’ longing for all they left behind in Cuba decades earlier. La Fábrica shifts the spotlight to Abel’s father, Ramón, who, having fled to the United States, now finds himself trapped in an alien culture and a dead-end factory job. Finally, Floating Home returns to Abel’s point of view—the younger generation’s fantasy of recapturing what his family has lost.

Union City, New Jersey, 2000. A small, modest apartment. Dark. Upstage right is a small dining room table with four chairs. An old rotary telephone is mounted on the wall. Downstage center is an old sofa and a rocking chair. In front of the sofa is a coffee table covered with books and newspapers. In fact, there are books in piles all around the room. An end table that doesn’t match is found to the right of the sofa. On it are a gaudy glass ashtray, a cheap modern telephone, and an answering machine. Upstage center is an old television set with a rug lying in front. The front door of the apartment is stage left. Next to the entrance is a coat rack.

Praise for An Intimate History of Exile

The playwright does an exceptional job of balancing this extremely personal story with the universal elements of family, identity, and mourning.

[A]n exquisite work of theatre…contains riches in its honest and unsentimental depiction of immigrant life.

…a charming, poignant story.… It is beautifully conceived and written....

An Intimate History of Exile has been added to your shopping cart.