Books » Non-fiction for Adults » Climate Guardians: Thoughts and Actions for People of Faith 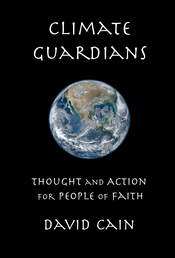 Climate Guardians: Thoughts and Actions for People of Faith by David Cain

How can people of faith respond to the worsening crisis of climate change? How—in the words of Pope Francis's recent encyclical "Care of Our Common Home"—can we learn "to live wisely, to think deeply, and to love generously" as we try to heal our wounded Earth? The challenges we face in trying to answer this practical and ethical dilemma are complex. Citizen-activist David Cain notes, "As science has gotten closer and closer to pinning down the reality of anthropomorphic climate change and its consequences, our moral certitude has frayed." This brief, eloquent book now attempts to address the issues by sketching a moral arc. "Regardless of your religious beliefs," Cain writes, "it's my fervent hope that by adding your own thought narratives to this moral arc, we can strengthen it. In doing so, we resolve the uncertainty paradox all together as we move beyond climate empathy toward action." David Cain's Climate Guardian is a must-read book for our times.

NOTE: INSTITUTIONAL DISCOUNTS ARE AVAILABLE. Write to [email protected] for information and to order.

This little book is the byproduct of my efforts to uncover the reality of climate change. No, not scientific reality, but full reality. The book is an attempt to rebalance forces that Pope Francis, in his Encyclical "Care for Our Common Home," warns are preventing us from learning "how to live wisely, to think deeply and to love generously."

First, a confession. I'm confronting a climate change paradox. I believe that this global situation is very real and very dangerous. But I confess that like everyday climate change deniers, I have a fossil fuel dependency. Religions teach us that we're all sinners. That label fits me—and it's humbling.

My denial paradox is strangely analogous to one of the most famous modern scientific discoveries, the "uncertainty principle." When one attempts to measure one of two different but related physical properties, determining one of the properties with greater precision results in greater uncertainly in the other.

Yes, climate science and climate morality are related. Yet as science has gotten closer and closer in pinning down the reality of human-caused climate change and its consequences, our moral certitude has frayed—at least if we gauge the situation by noting our individual and collective inaction. Individually and collectively, we can't stand the implications. Agnosticism and apathy are at play here.

Why? Many of us won't be personally impacted by climate change to any significant degree. Who, then? Other people in different places and generations will suffer the direst consequences. We who are living in the early twenty-first century may take incremental steps to reduce our carbon footprints. We're empathetic. But empathy simply isn't good enough, and we know it.

This modest collection of essays attempts to resolve that uncertainty by sketching out a moral arc. Each essay serves as a navigation point in thought. The first essay considers God's grant of dominion and human proprietorship. That proprietorship isn't earthly domination, but stewardship. The next essay explores the hypothesis that climate change, like slavery, is not original sin and therefore not automatically subject to His grace.

The trajectory of the moral arc bends to the horizon with an essay that compares the structure of an oil drilling platform to the layers of passive iniquity that fossil fuels play in our lives. At the arc's apogee is an essay about a leap in faith, describing how individual climate commitment is supported and safeguarded by the canopy of all the major world religions.

The glide path along the moral arc is marked in a subsequent essay about spiritual awakening and personal climate-change witnessing.

The final two essays seek to bring climate morality down to earth—dismissing, first of all, the notion that God will save us; and, second, imploring us to act as Good Samaritans against pluralistic ignorance. Here is where the concepts of good stewardship (at the trajectory's beginning) and good Samaritans (at the trajectory's end) are intended to infuse thought with action. That is where I believe full climate reality lies.

I realize that secular readers and those of other religious traditions may have difficulty embracing the notions of "climate sin and salvation." Regardless of your religious beliefs, however, it's my fervent hope that by adding your own thought narratives to this moral trajectory, we can strengthen it. In doing so, we resolve the uncertainty paradox all together as we move beyond climate empathy toward action. That action will cause climate altruism to grow exponentially amongst us, summoning the better angels of our natures. This is the essence of climate guardianship.

The Promise of Climate Stewardship

A February 15, 2015, article in The Deseret News, a publication owned by the Church of Latter Day Saints (the Mormons) is titled: "Dominion & Stewardship—The Disappearance of Dominion Thinking in the Christian Climate Change Debate." Giving this topic a full-page spread in its Faith section is significant in its own right, underscoring the notion that climate change is a matter of grave spiritual concern.

Climate change, and our role in causing it, is one of the great moral issues of our time. Many religions have adopted positions urging members to confront it, but the Mormon linkage of climate and stewardship drives right to our common moral core.

There has been a marked shift in public attitude (since the 1960's) about humankind's dominion over nature. According to a 2014 Public Religion Research Institute study, 57% of U.S. adults believe that humans should be "stewards" of the earth's creatures and creation, while only 35% believe humans favor "dominion." This represents a sea change in western attitudes since the start of the Enlightenment period hundreds of years earlier.

Why is this so? The traditional pretext is in Genesis 1:28, in which God exhorts man to "Be fruitful, and multiply, and replenish the earth, and subdue it: and have dominion over the fish of the sea, and over the fowl of the air, and over every living thing that moveth upon the earth." The word "dominion" has justified the mindset that man can use the earth's resources for his own ends and as he sees fit. That includes unfettered extraction and burning immense quantities fossil fuels, as well as exploiting the earth in many other ways as a grant of dominion by God.

But The Deseret News article points out that "dominion" in English versions of the Bible is translated from the Hebrew word radah. It also notes a common problem in translation where languages do not align: direct word substitutions without carrying forward the source's underlying context often convey the wrong meaning. In this case, the context for radah in the original text is "benevolent rule." Good radah is increasingly interpreted by biblical scholars as "stewardship." Michael Stead's Anglican essay, "To 'Rule Over' and 'Subdue' the Creation," exemplifies this evolution in religious thinking. Stewardship is also a key element of Pope Francis's 2015 encyclical on climate change, "Laudato Si."

Growing popular support for "stewardship" over "dominion" during the past 50 years may actually stem from that other word in Genesis 1:28: "subdue." If there were ever a time in recorded history when humans have managed to subdue nature, at least temporarily, this would be it. In many parts of today's world we live in "gardens" controlled and shaped by our own technology. Ordinary people unconsciously sense the increasing fragility of nature under assault from human activities. And they are commonly associating environmental stewardship with virtuous behavior. This conjoining of religious teachings and the popular stewardship has great promise for broad environmental awakening and push for climate stewardship.

Climate Guardians: Thoughts and Actions for People of Faith has been added to your shopping cart.