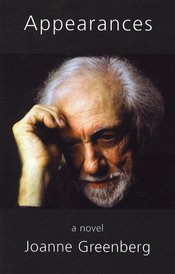 In its nuanced portrait of a middle-aged suburbanite and his family, Appearances challenges easy assumptions about the nature of kinship and selfhood, of crime and punishment, of appearance and reality. Steven Howe—Boomer, lawyer, family man— has settled into midlife contentment. Then, unexpectedly, Steven finds himself doubly shaken by something that a data search uncovers his father, Alonzo "Lon" Howe, long assumed to have died in 1958. What follows is a series of revelations that shake Steven's perceptions of himself, his family, and his marriage. Unafraid of risking controversy in the pursuit of insight into the human condition, Appearances is Joanne Greenberg's finest, most challenging, and most compassionate novel.

Joanne Greenberg, one of the great storytellers of our time, has outdone herself in Appearances. Here is a rich, exciting, moving novel of family life—one that explores the complex, mysterious, painful bonds between parents and children, and between past and the present. Joanne Greenberg looks deep into the hearts and lives of her characters to ask hard questions: what, in extreme circumstances, are the sources of healing for our bodies and for our spirits? Appearances is one of the most beautiful novels I have read in years, one guaranteed to open the hearts and widen the vision of readers everywhere.

Appearances has been added to your shopping cart.